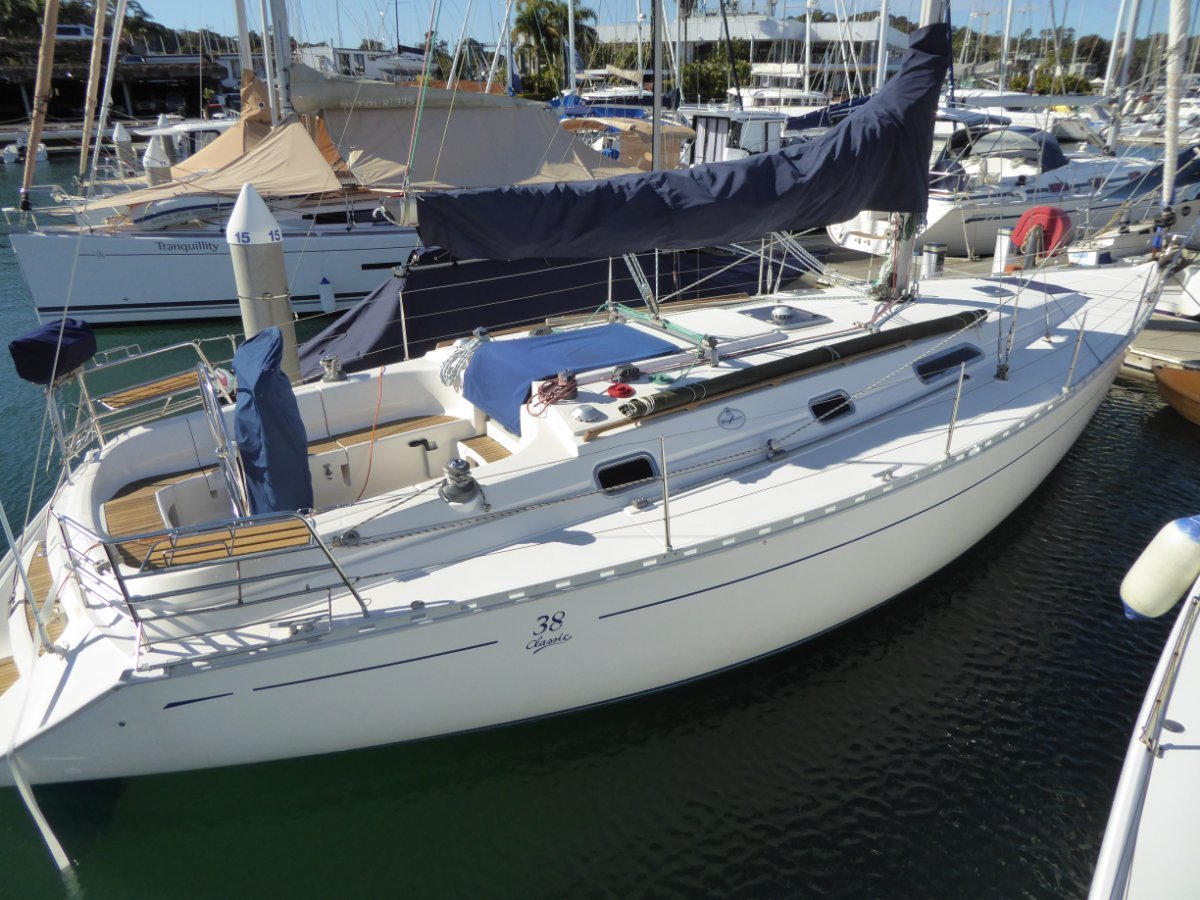 Known for their superior construction compared to later model production yachts, Always berthed and kept in superb condition by the same owner since new launch.
*Owner is a marine industry stalwart as a sail-maker and ship chandler.

Built to and maintained in current AMSA 4E& 2D survey and occasionally used for very light recreational charter with NO charter wear and tear.
Existing charter management with one of NSW premier charter fleets can be continued, which will offset expenses and enable legitimate tax advantages.

'Mirage' is recently anti fouled and polished and serviced, with standing rigging and headsail furler replaced 2016 &19

Classic styling that hasn't dated nor should. Functional comfortable layout and quality construction, with french flair in design and fitout.

We have known this yacht since first launched and can confirm it will pass any pre-purchase survey inspection with flying colours.


Boatpoint Boat review on "Mirage"
Dufour 38 Classic
Resistance is useless with the user-friendly, fleet-footed, French-built Dufour 38 Classic. David Lockwood found it tres elegant during one of his "Sails of the Century"
I had no problem with the short notice - and the lengthy drive to Prince Alfred Yacht Club - that I was called to duty on the second last day of the century. No worries about the queues at the bottle shops (where stocks were fast running dry), that I was ordered to prepare a caesar salad for 20 before nightfall, or that I'd miss the news from the fastest Sydney-to-Hobart yacht race on record.

When the invitation came to sail the new Dufour 38 Classic on sunny Pittwater, I leapt at the chance. With the kind of soggy summer we've had in Sydney this year, one needs to seize every blue-sky day. And at least this sail started out that way...

But whether it was the all-too-rare glimpses of sunshine, the fact that yacht-broker 'Uncle' Bill Rowell arrived with some extra Christmas cheer, or that we were just two days away from the end of the millennium celebrations in Sydney, I'm not sure.

Whatever it was, this was most definitely one of my sails of the century.

Firmly ensconced in holiday mode, the three of us cruised barefooted down Pittwater with all the time, but none of the worries, in the world.

The only real surprise came for my poor partner, Katherine. Unbeknown to her, she was needed to steer the 38-footer in 12kt of sea breeze while I took the pics. But if her white-knuckled stint at the helm is anything to go by, the Dufour 38 Classic is exactly the kind of cruising yacht couples should consider.

Though it's a big yacht in terms of power and proportions, it's a snap to park at the marina; set sail and, given a few more days of sunshine, voyage up the coast for a holiday afloat.

FRENCH CONNECTION
Some two and a half years ago, Pacific Yachting at Lake Macquarie took the brave step of importing its first Dufour yacht into Australia. It sold just three yachts in the first year, then 11 in the ensuing 18 months, with six being delivered in the last six months alone.

Compared with the other French brands, Dufour does things a little differently. Rather than being known for a certain style, the company builds a number of yacht ranges to cater for different tastes.

The aptly-named Classic series combines traditional looks and seaworthiness with fine timber finishes and modern fittings. There are nine yachts from 30-50ft in the range. The only other series to be imported is the Atoll, which is built for charter, and there's now a Dufour Nautitech catamaran Down Under.

Dufour also makes the lift-keel Integral range of yachts, Centre Cockpit yachts for cruising types, the self-explanatory Prestige line-up from 50-110ft, the racy Trophy series, and a powerboat range. And the company makes the GibSea brand of yachts to compete with the more avant-garde Beneteaus and Jeanneaus.

Compared with other European yachts, Dufour's strength lies in the quality of fit-out and, at least with the Classic, the timeless design. The finish is also a little more up-market, with precision joinery, high-quality Corian benchtops, and designer fabrics. Options range from a matt or gloss finish on the teak saloon floor to greater accommodation and details, such as teak decks and shoal-draft keels.

The testboat had an optional three-cabin/two-head layout better suited to charter work, partly because Pittwater dealers, Club Yachts Sales, are offering a 'try before you buy' deal. The cost of the charter is then refunded if you go on to purchase a Dufour.

The next level of fit-out (known as the Performance Pack) includes a fully-battened mainsail with lazy jacks, bigger 48 Genoa winches for the spinnaker gear and pole, a folding propeller, and an adjustable backstay. (My preference would be the Cruiser Pack, plus lazy jacks and folding prop. )

SOLID HULL AND FITTINGS
Whichever level of fit-out you choose, all Dufour hulls are formed using hand-laid rovings and NPG resin and gelcoat to protect against osmosis. The hull itself is GRP around a foam core, bonded using the modern technique of vacuum-bagging.

Glass-encapsulated ply floors are laminated to the hull, the deck is balsa-cored sandwich, while the semi-elliptical rudder is filled with closed-cell foam and mounted on self-aligning bearings. This good and reliable engineering is another Dufour trait.

The mainsheet is on the cabin top, thereby freeing-up the cockpit, which comes with a lunch table and additional teak pushpit seats. There's space for eight bodies and a lift-out helmsman seat to make way to the moulded transom, which has a freshwater shower, steps leading into the water, and gas bottle and life raft or tender compartments nearby.

The twin-spreader rig has monostrand stainless shrouds mounted inboard to allow ease of movement forward. (Not that a couple really need to leave the cockpit. ) There's a roller furling headsail and pedestal with electric anchor winch button, Autohelm instruments and a responsive leather-wrapped wheel.

CLASSIC INTERIOR
Down below is the where the Dufour 38's presentation might be considered tres elegant. A forest of semi-gloss Khaya mahogany paneling shines under natural light or the abundance of overheads. The roof is topped with a nicely moulded white headliner, with a white-marble coloured fabric with green-leaf motif on the cushions. The fabric has a pleasant velvet touch.

The teak-and-holly flooring leads forward to a forepeak cabin that's big enough to sleep two at anchor. It has mahogany lining, storage in side-pockets and under the bunk (where one of two water tanks is located), twin lockers with hanging space and drawers, plus a double berth that measures 2m x 1.6m with high-density foam mattress.

The en suite on the starboard-side isn't huge, but it has headroom and the necessary comforts to encourage days or weeks on the water. Corian benchtops, a hot/cold shower, manual head, plenty of storage for personals, and a mirror come standard. A nice touch was the towel rack that doubles as somewhere to dry your foulies.

Aft of the mahogany bulkhead, separating the forward cabin, is a saloon with headroom of around 1.85m. It's designed for spending long nights eating, drinking and being merry, as the main feature is a huge dinette with U-shaped lounge, and separate double seat, that can seat eight people or convert to accommodate two at night.

The settee cushions are contoured for a comfortable fit, there's bottle storage built into the base of the table, while the galley remains just a long arm's length away. The back of the separate benchseat fronting the dinette can be used as a brace if you're cooking in seaway.

Among the smart features of the galley are twin stainless sinks, chrome-plated taps, a two-burner gas stove/oven, a wonderful 150lt deep fridge, and abundant storage for crockery, cutlery and cooking utensils.

The sand-coloured Corian benchtops added a sense of class.

Amidships on the port side is the day head with a stylish sink set in Corian, good access to the plumbing (all brass seacocks), a Jabsco loo, and separate sit-down shower space with teak bumrest and chrome fittings.

The day head also had a towel rack-cum-clothes line.

The navigation station on the starboard-side is seriously big, with enough space to rest a folded chart, a comfortable pedestal seat, facia for mounting navigation equipment, control panel with perfectly logical wiring, and a hanging locker for the now dry wet-weather gear.

Back aft are the two cabins, which double as sea berths depending on your tack. Each has a double berth measuring 1.9m x 1.4m, hanging locker with shelf, an open shelf alongside the bunks, and a hatch for fresh air.

The inner panels of the aft two cabins and the companionway steps lift to grant access to all sides of the Volvo engine. It became clear, as we edged away from the marina, that the saildrive makes the Classic 38 a manoeuvrable yacht. A self-feathering prop would help performance under sail.

PITTWATER CRUISING
Despite sporting a hand injury, the loveable Bill Rowell insisted on taking care of the deck. This left yours truly with the arduous task of helming the 38-footer. When time came to take pics, I transferred to a camera boat and, low and behold, Katherine took over the wheel.

Gadding about in the 10-12kt sou'easter, the Dufour 38 felt solid, predictable, capable and virtuous. With a 135% headsail and full main the fine-entried, well-balanced yacht can point at 30° all day. We were doing around 6.5kt upwind, with the yacht virtually slotting itself in the groove.

Having safely negotiated the narrows off the RPAYC, Katherine offered the helm and I swung the bow north. From here we broad reached or ran free for several cruisy miles down Pittwater.

The company was great, and the handy sea breeze carried dreams of slipping outside and running up the coast.

In the hands of old salts like Bill Rowell, and new blood such as Katherine, the Dufour Classic 38 performed as the perfect host. The yacht is at once user-friendly and fleet-footed, comfortable up top and commodious down below.